I was really looking forward to racing the Snow Canyon Half Marathon in St. George, Utah. It is a downhill race that goes from 4695 feet to 2812 feet. It is a great course to set a Personal Record (PR) on. I had planned on making this a PR race for me. With my injury on 10-10-15, torn ACL and Meniscus of my right knee, I was not going to be able to go for that goal. I realized that they had a 5K so I decided to change my registration to a 5K and walk it. My husband was still going to run the half marathon so I figured I might as well participate since I had already paid for it.

We drove up on Friday night so we could pick up our race packets and attend the vendor fair. It was located at the Dixie Convention Center. The vendor fair was small but packet pickup was quick and easy.

We stayed in a hotel that left a lot to be desired. It was not super cheap but was definitely not one we will stay in again. The beds were comfortable but the walls were paper thin. That led to me not getting a lot of sleep.

I was able to maintain an average pace of 18:00 minute miles. The course was a square with one corner having an out and back section. On that section, we made our way beside some of the lava fields. It was really pretty so I decided to take some pictures. At around the 1.5 mile mark, I was looking at the scenery and not at where I was walking and stepped off the edge of the road. This caused me to lose my balance and fall down. With me knee injury, I have lost the ability to regain stability once lost. Luckily, I was going slow enough that it was a relatively painless fall. I landed on my hands and left knee. I wasn't able to get up on my own so two older ladies, who were walking behind me, helped me up.


I was able to continue walking at about the same pace and encountered no further perils. Around the 2.5 mile mark, the 5K and the half marathon courses joined. I was able to see the front runners merge just before I was at that spot. As I neared the finish line, there was a course photographer so I smiled for the camera. They also caught my husband as he ran by. 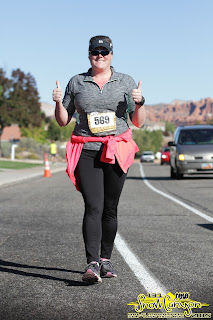 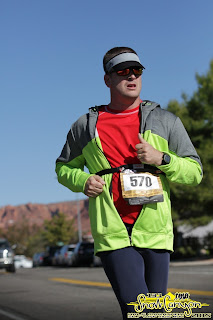 The finish was on the track at the high school. They had a nice long finisher's chute set up that was about 75 meters long. It was lined with spectators and already finished racers. It was very hard to walk that section. I know it's silly but I was embarrassed. I wanted to sprint in like I usually do but instead I kept my steady pace and finished the race. My official time was 58:38.

I made my way to the side of the chute to wait for my husband to finish. I knew he wouldn't be too much longer and I was right. He finished strong with a time of 2:04:16. 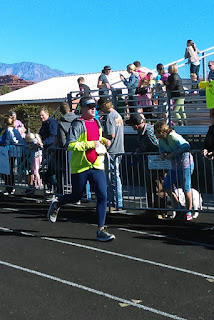 After he finished, I met him for our customary hug. They offered several snacks and drinks for the finishers. There was an award ceremony for the overall winners and the top three in each age group. They had a tent set up so you could check your time and placement. We checked both of our results and then made our way back to our car. We stopped for a quick lunch and then drove home to Las Vegas.

This race is put on by St. George Races. This was my second race with them and so far I am really impressed with their races. They offer nice tech shirts, free race pictures, great medals, and certified courses.

Posted by Unknown at 7:41 PM No comments: 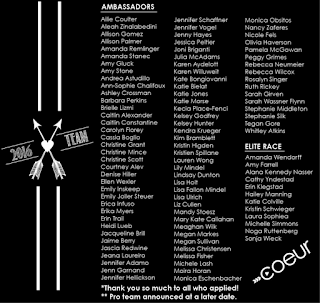 I am so excited and honored to announce that I have been named as a 2016 Ambassador for Coeur Sports! I contacted them and told them that I am injured and that my 2016 race season will not be what we had expected. They said that they would still love for me to be on their team! She asked that I chronicle what it is like to be an injured athlete; recording the journey through injury, back to training and finally to racing. She said it is something every athlete can relate to and be helped by. Their slogan is Heart and Courage. That perfectly describes what I'm feeling now. I think that I'm going to fit right in on their team! 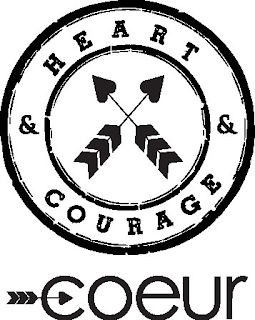