My fall was full of training and racing all in preparation for Ironman Arizona. I joined several friends at Sand Hollow State Park to race in the Kokopelli Olympic Triathlon. I had competed in this race as both a sprint and Olympic in the past. It is always a well run race with good support and beautiful scenery. I used this race as a supported training day.

It was a perfect day for a race. There was no wind and lots of sunshine. My swim wave started just before the sunrise which was great because we didn't have to worry about the sun in our eyes as we tried to sight. It just started to peak over the horizon as we made our first left hand turn. The water was smooth and the swim went quickly. I finished the 1500 meters in 28:31.

Transition was typical with no issues. I had my bike racked near the bike exit which is where I prefer. I was in and out of T1 in 2:52.

The bike portion of this race is shorter than a traditional Olympic distance triathlon. That makes for a quick ride. It consists of a mainly flat ride except for "The Beast" which is a mile long hill at around the 3.5 mile mark. After that, the bike course is quite enjoyable and returning down that hill is a blast. I completed the 20.4 mile ride in 1:21:04.

Transition once again went without issue. I racked my bike, changed my shoes, exchanged my helmet for a visor and was off. T2 was 1:34.

The run was hot since there was no wind and we were in full sun. The run has one major hill that is only about 0.25 miles long just after the one mile mark. Once you crest it, the bulk of the run is mainly flat. The only other hill is the final stretch to the finish line. It is always a killer to try to push up that hill. It is lined with spectators and friendly faces so I somehow always find a tiny bit of energy to finish strong. I completed the 6.2 mile run in 1:19:26. 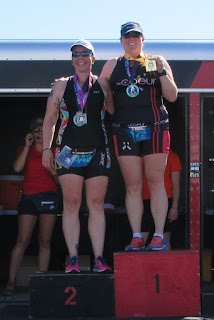 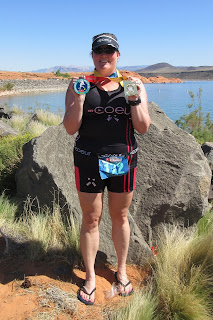 A few days before this event, I was given three free entries. I contacted a few friends to see if anyone wanted to join me and of course I found some. The MS Bike offered several distances. I decided to do the 50 mile ride.

We arrived at the start location near Fremont Street and prepared for our ride. I met up with several friends while we waited for final instructions. We were all planning on doing different distances so we grouped up with the ones that were doing the same. 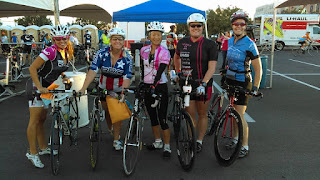 One of my best friends was doing the 50 miler as well so we decided to stay together for the entire ride. That made for a much better day! 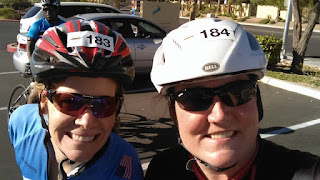 This was my first time participating in this ride. The route took us through Henderson, Summerlin and Las Vegas. It had aid stations about every 10-15 miles. The route was well marked and easy to follow. 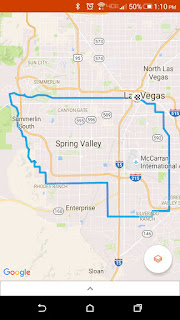 It was a steady climb from about mile 4 to mile 38. I could tell I was climbing but only the final eight miles really felt like it. Mile 38 to 50 were fast and fun! We were on Alta which is a street that can be busy in spots and there were several intersections we had to stop at but it wasn't bad and made the climb worth it.

After the ride, the finish line was a party and a fun atmosphere. There was bar-b-que and music for the riders to enjoy. We sat around enjoying our food and telling each other about our day. It was a great way to end the day! 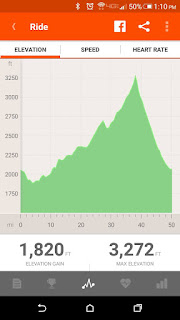 I capped off the Las Vegas triathlon race season by competing in the Pumpkinman Triathlon on a sprint relay with my husband and oldest son. I was the swimmer, my husband was the biker and my son was the runner.

Pumpkinman has a unique race structure by having a split transition. T1 is at Boulder Beach at Lake Mead while T2 is at Wilbur Square in Boulder City. On our way to race start, we dropped my sons off as T2 to wait for a few hours until it was my oldest's turn to run. Meanwhile, my husband and I continued to T1 to start the race. Since there wasn't a transition to set up, we didn't have to arrive too early.

I made my rounds of saying hello to friends and then headed to the water. I completed the 750 meter swim in 14:22. I exited the water, ran through transition until I found my husband, gave him the timing chip, and watched him leave on the bike. I then changed my clothes and headed to the car. I needed to drive to T2 and hoped to get there before my husband. 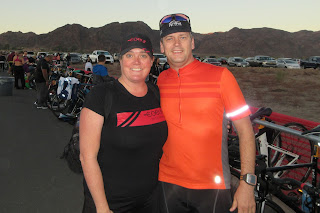 There is always lots of traffic trying to leave the park all at the same time, due to everyone having to drive to T2, so it takes a long time. As I was approaching Boulder City, I could see my husband making his way up the 8 mile hill climb and knew that I was going to get there in time to see the timing chip exchange. I finally arrived and found a parking spot along a side street and made my way to T2.

I found my kids and told them that their dad was almost there. My oldest son was ready to go and waiting at the timing mat. As soon as my husband crossed the mat, my son grabbed the timing chip, attached it to his ankle and was off. 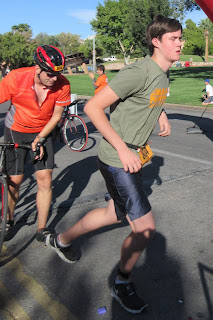 My husband put his bike on the rack and we went over towards the run course to wait for the finish. He decided he would run the last half mile with my son to help him finish the race strong. 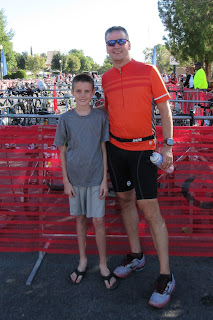 I waited near the finisher's chute so I could run in with them. I finally saw them heading up the final hill. I joined them and we finished together. Our total time was 1:47:16. We all had great times and gave great effort for our portion of the race. It was a lot of fun racing together as a family. 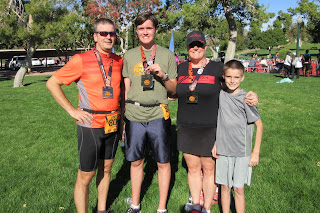 My fall was full of training and had a lot of miles and hours. It was really fun to break up all the hard work with the occasional fun event. I loved being able to spend time with my family and friends and being able to include them on part of my journey to Ironman Arizona 140.6.