I picked the Las Vegas Triathlon Half as my lead up race to Ironman Arizona. I had raced the sprint distance with them last year. It was put on by a great company that I have raced with many times before. They had not offered a 70.3 for a few years but decided to offer one this year since Ironman Silverman 70.3 announced that they would no longer put their race on after 2015.

I am in the midst of training for my full Ironman and this race lined up perfectly for my training. I hoped to race it well but honestly, it was really just a supported long training day. I hadn't trained out at the lake since this race last year so a few weeks ago, I went out for a swim/bike brick with some friends. I was quickly reminded that it is a hard ride out there. I had been scheduled to ride 40 miles but due to the heat, wind and road condition, we all cut it short to only 20 miles. That's when I realized that this race was going to be a really hard one. Then, last week, they published the Athlete's Guide with the route maps. I had been on these routes before in training and at other races so I knew that it was going to be a difficult day. 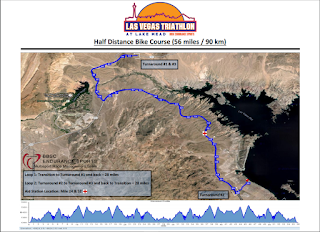 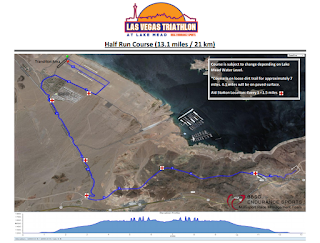 I wanted to use this race as a practice run for my nutrition and hydration for Arizona. There was one aid station for the bike course and I would be passing it at mile 24 and mile 52. I decided to carry two bottles with me filled with Skratch Pineapple Hydration Exercise Mix. I left my third bottle cage empty and would grab a bottle of water when I went by the aid station at mile 24. The run course had six aid stations that would be passed a total of 12 times so I decided to not carry any hydration with me on the run.

The morning of the race started like any other. I woke up, went to the bathroom, got dressed, applied my sunscreen, and ate breakfast. I had 2 eggs scrambled with black olives, grape tomatoes, shredded cheese, salt and pepper. Then I drank 500 mL of water with one scoop of UCAN. I ate in the car since it was an hour drive to the race site.

Transition opened at 5:30 AM and we arrived at 5:45 AM. I was scheduled to start my race at 6:35 AM. I easily found a place to rack my bike and quickly started setting up my station. Once everything was set up, I got body marked and made a stop by the port-a-potty. Then I was able to chat with a few friends. That is always nice since race day is the only time I get to see a lot of them. 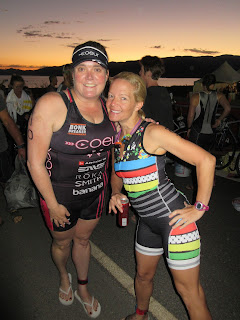 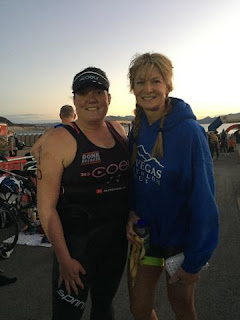 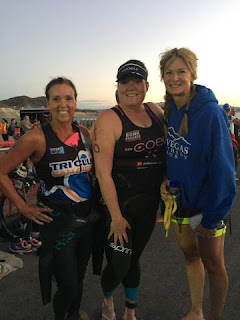 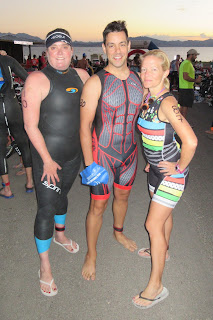 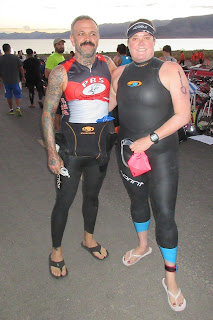 At about 6:15 AM, I put on my wetsuit and made my way down to the water. This was my second time wearing my sleeveless suit. The other time was an Olympic triathlon three weeks ago. I had no issues with it then other than the neck is a little tight. I walked into the water to get my goggles rinsed out while the men were getting their final instructions. After they started, I saw my coach and got some final words of encouragement. I then gave the hubby a kiss and lined up with all the other women who were tackling the 70.3. 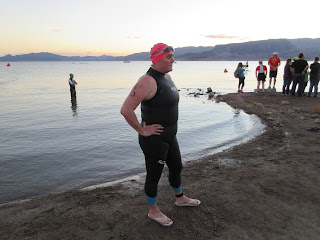 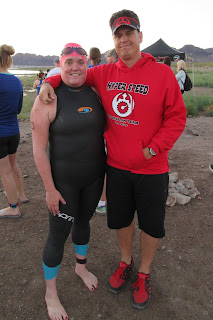 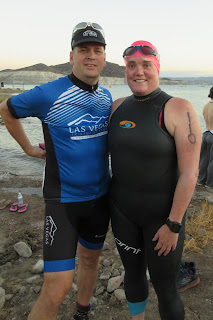 I listened to the final instructions again and then entered the water. The entry was covered with rocks so it was slow going. I wasn't even to the starting line when they blew the horn to go. I started my Garmin and dove in. The sun was just rising and the winds were calm. It was a beautiful morning for a swim. The start of the swim was congested until the first left hand turn. Once along the back section of the course, it opened up and I was able to get into a nice rhythm. The swim course had been changed the night before from one long loop to two shorter loops. I hate loops. It is so disheartening to go passed the exit/finish and have to turn the other way and continue racing. By the time I was on the second loop I was passing men from the wave before me. That's always a good feeling. What wasn't as good a feeling was the chafing I was getting under my arms. Something must have been different this time and my wetsuit was eating up my arms. At the final turn, I found myself in a crowd of men. They were a bit more physical then the women so I had to be a little physical back. Finally, I was heading towards the swim exit. Once my hands hit the bottom of the lake, I jumped up and started running out. As I was running up the shore to transition, I saw my coach as he cheered me on. I also heard several other people call out my name but didn't look to see who they were. It was neat to hear though and I really appreciated it. I crossed into transition for a total swim time of 36:10.

My husband was standing by my transition station so I would be able to find it easier. It worked like a charm and I ran straight to it. I took a little longer than usual in transition to make sure I had everything I needed for the bike ride. I gave the husband a final wave and was off. The transition area was 1/10th of a mile long. That's a long way to run in biking shoes! I exited transition in 4:07. 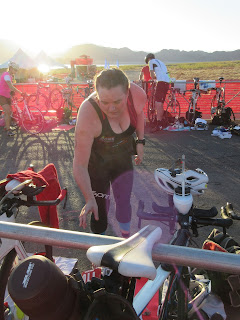 My goal was to complete the bike in 4 hours meaning I needed to maintain a 14 mph pace. I felt pretty good for the first 1/4th of the ride. It was hard but I was doing ok. I took two electrolyte pills. I hit the first turn around in 1:08 which meant I was 8 minutes over my goal. I wasn't too worried about it since I knew the way back was a little easier. I started to get some headwind on the return trip and started to run out of my first bottle of drink. I passed the aid station and grabbed my bottle of water as planned. I hit the second turn around in another 1:04. That meant I had stayed pretty consistent with my speed but was still a little behind schedule.

As I headed out on my second lap, I drank a shot of UCAN that I had in a small bottle in my back pocket. It was really thick and I was only able to get about half of it down. I started to notice more wind and it seemed to be coming as a cross wind now. I was riding dish wheels with a 60/90 combo. I was really getting pushed around on the downhills. At about mile 38, I finished my second bottle. I then used the water bottle I got at the aid station to refill my front bottle. I was really starting to get hot and started to drink more. By the time I hit the third turnaround, I was almost out of all fluids. I made it there in another 1:10. I began to worry about finishing the bike in time to finish the run by the race cut-off. I asked the volunteers at the turn around if they had any water but they didn't. I stopped to take two electrolyte pills. I only had 14 more miles and prepared myself for the final push home. As I passed the volunteers at the Olympic turnaround I asked if they had any water. They had one bottle of water that was hot since it had been sitting in the sun. I didn't care and took it from them. By this point, I only had about 6-8 racers behind me and I could tell that we were all struggling. It was hot and were now racing into a headwind. I started a long climb and began to feel myself fading. I was running out of energy. I knew that there were Rangers and an ambulance at the top of the hill. I planned on asking them for water too. I knew that if I could get a fill up there, I would be able to finish the course since there were only 11 more miles.

I finally crested the hill and saw the Rangers. The ambulance was not there. I stopped to ask them for water. One Ranger said he had ice and took my front bottle to fill it up. The other Ranger ran to his truck and came back with a bottle for me. I chugged it down. As I was putting my front bottle back on, the ambulance came up behind me. The medics got out and started talking to us. One of them grabbed my wrists and checked my pulse. He said that my pulse was not normal and said he wanted me to sit in the back of the ambulance to cool off. I resisted because I knew that if I did that then I would probably not continue the race. After talking to me a little more, they finally convinced me to get in. They hooked me up to an IV, EKG, pulse monitor and tested my blood sugar. My blood pressure was in the 90/50s. With those low numbers they said that I was done. I started to cry. I didn't want to go out like this. I just wanted to get back to the transition area. They loaded my bike and started transporting me to the race start.

Once back at transition, we found my husband and told him what had happened. He loaded up my station and turned in my timing chip. I was bummed.

I ended up receiving 2500 mL of IV fluid before my blood pressure returned to normal. I was told that I had experienced heat exhaustion and dehydration. They told me that if I hadn't stopped and had tried to continue that I might have passed out on the ride. Even though I hated DNFing this race, I learned a lot. I hope to utilize this lesson to help make Ironman Arizona a success.

This was a hard race. I made some poor decisions. It was tough conditions. Out of the 112 people registered for the half distance, 43 were either DNF or DNS. Only 69 people finished the race.

I could let this get me down and make me question my desire to race in Arizona but I'm not going to let it. I am putting in the training. I have an amazing support crew around me. I am stronger than I think I am. My coach sent me this yesterday. I liked it. I'm ready to get out of the harbor. 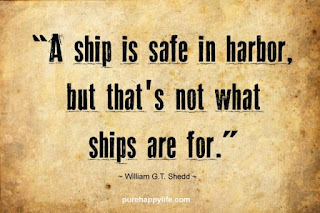